The Othering of Cyclists

Everyone loves a good scapegoat. When your business is faltering because of Covid, or your shop is losing trade because of the internet, or when you simply can’t turn left outside your house as you have done for the last twenty years to drive to your local shops — blame cyclists. When you’re stuck in traffic and someone sweeps past without a care in the world (and without paying for road tax or insurance) — blame cyclists.

Lockdown saw a sudden surge in the popularity of cycling. It was easy to socially distance, the roads were empty, it counted as exercise, you could take the kids. But now traffic levels are overtaking pre-Covid rates as we shun public transport. Central government in the UK responded by seizing the chance to announce “a green transport revolution.”

The othering of people on bicycles was already a well-known phenomenon. For some years people on bikes have been perceived as members of a different, lesser species, not deserving of the basic consideration or courtesy one would usually extend to an equal. An article in Transportation Research last year revealed that more than half of car drivers think cyclists are not completely human. Seventy per cent of cyclists have experienced some form of aggression. Recently the phenomenon has become critical. A Labour councillor hit by a car recently reported on twitter: “A man … hit the front of my bike… he carried on driving to push me out of the way. I wasn’t a human, I was [an] obstacle.” Last week as I pottered inoffensively along, not blocking any roadspace, a man in a sports car shouted at me ‘You piece of shit, get back in the cycle lane’ (which was closed); face to face he would never think of screaming this at a passing woman. If cyclists were a race, this reaction would be racist. But safe behind their metal walls car drivers are inviolate, and smaller beings are simply reduced to objects in their way.

Somehow the car protects the driver not only from physical damage but also from the norms of civilisation. The car is larger than the bike, therefore the driver must be more important and take priority. When I worked in the Mercedes factory as a student we joked that the car came with ‘inbuilt right of way.’

A crash caused by a person on a bike will attract many times the attention of the five-a-day crashes caused by car and lorry drivers. Many will remember Charlie Alliston cycling on his fixie who got an 18-month sentence for colliding with pedestrian Kim Briggs who stepped out in front of him (she was fatally injured). Who remembers the three women who all lost a leg around the same period in the nearby streets — NHS midwife Julie Dinsdale, aged 54 (driver given 5 points and fined £625 for careless driving); Victoria Lebrec, aged 28, hit by a skip lorry; or Sarah Doone, aged 38, hit by a cement lorry barely a month after a 38-year old cyclist had been killed less than a mile away. The only case we recall is that of the cyclist Charlie Alliston.

This othering has become a more widespread phenomenon in recent months, ever since social distancing became the norm and councils started actively to create extra space for pedestrians and cyclists, encouraged and prodded by financial incentives from central government. Suddenly cyclists feel optimistic, and car drivers feel threatened. Throughout the country, councils which were tinkering at the edges trying to introduce a few token cycle lanes have suddenly been emboldened by government policy — and indeed forced by threats of defunding — to dust off their more radical plans and rush them into action under Emergency Traffic Orders. These require no consultation before implementation, and are supposed to be tweaked and consulted on once they have been installed.

A Low Traffic Neighbourhood might mean that a person in a car can no longer drive the direct route they have always driven to the local shop to pick up some milk; suddenly, instead of an opportunity to reclaim the streets for children, pedestrians and cyclists, this becomes a major infringement on a car driver’s human rights. Across the country the bikelash erupted. In Ealing a local councillor led a street demo of hundreds to demand the return of their High Traffic Neighbourhood. In Wandsworth a tepid council bowed to pressure after a week (even though traffic changes would usually take a few weeks or even months for sat navs and habits to begin to respond). The Royal Borough of Kensington and Chelsea, the last dinosaur on the block that had been dubbed the Royal Borough of Killing Children, unveiled a temporary cycle lane only to remove it hastily after a few weeks just as it began to gain traction. Councils are inundated with letters of complaint, often orchestrated by groups dubbed One — as in OneIslington, OneLevenshulme, OneChiswick — often claiming to represent the rights of those living on main roads, or the disabled. Soon other organisations, such as those representing cab drivers and libertarians, gravitate to these protests and the demonstrations become more physical with planters vandalised, irate street demonstrations and physical threats to those supporting the calming measures. In Islington ex-UKIP, now Heritage Party, London Mayoral candidate David Kurten addressed a small anti-LTN rally, praising them for ‘standing up for London, standing up for freedom… cars can’t travel around… and democracy is being destroyed.’ In Hounslow a councillor led a group of residents to prevent installation of a traffic filter wearing a V for Vendetta mask; pro-LTN residents complained, police attended and within an hour the United Cabbies Group were galvanising their membership in support. A few weeks later there were threats on social media to shoot councillors supporting cycle-friendly traffic changes.

The othering of the cyclist has several causes. For some it can be ascribed to the guilt of the driver. They are not climate change deniers (usually), they know that driving damages the environment, they know there is a public health crisis related to obesity (indeed they frequently drive to the gym), they know the air is polluted. But oh the convenience! That old saying, about ‘traffic is other people’ holds true. Add to that the undeniable smugness of many cyclists, who gloat that they are doing their bit to save the planet — and putting themselves in danger at the same time. Much of it is simply down to pure jealousy — cyclists can go everywhere, they are unburdened by traffic gridlock, they need no training, no licence, no insurance, no road tax. It simply isn’t fair! As John Baker put it on twitter: ‘In our dominant ideology, cycling is an aberration. It ignores technological progress, modern patterns of credit and consumption, the virtues of speed and power, and the idea of a car as a status symbol.’

Meanwhile drivers are burdened by taxation and increased legislation. Whilst drunken driving is now seen as beyond the pale, speeding or driving while on the phone are still considered acceptable, and being caught for these offences is an example of the gross unfairness of the modern police state. On our local forum a lady, known for her opposition to LTNs and castigation of light-jumping cyclists, bewails ‘My husband who is one of the most careful drivers I know has just received a nasty letter threatening him with prosecution’ — for speeding.

Yet calling for the complete abolition of cycling sounds too extreme, even to the ears of the most fervent opponents. The socially acceptable response is to say that of course they support safe cycling, but not here, always over there. Sometimes they claim to use a bike themselves, starting their comments with ‘As a cyclist myself… ‘ or ‘I’m all in favour of cycling but not on this road…’ The routes they propose instead are invariably along highly polluted A roads, or via long diversions through winding back roads. Not only do people on bikes expend tangible energy, and the direct route to a destination will always be the most appealing to them, but there is little point putting a cycle lane far from the local amenities that people wish to visit.

Cyclists are not blameless. They are less able to take their hand off the bars while turning corners to thank drivers, and they are likely to respond aggressively, especially if they’ve just escaped serious injury by careless driving; the body automatically releases adrenaline when it has had a fright, leading to a fight or flight reaction. I’ve said things I wouldn’t normally say after being inches from possible injury or death by some impatient and terrifying piece of poor driving. Even ringing a bike bell has become a dilemma; some pedestrians see it as aggressive, some as fair warning, most have their earphones on and don’t even hear it.

There is a widespread tendency to anthropomorphise the vehicle. A typical piece of reporting from our local website reads: “A cyclist was knocked off his bike by a door being opened on a car shortly before 8.05pm.” The cyclist is not really a person, and the door was not opened by a person. The injuries caused by the thoughtless action however could result in months of rehab or worse for the person on the receiving end.

Another rich avenue of abuse lies in the clothing which many cyclists wear. Lycra is widely stigmatised; a standard comment would be that he was ‘a typically ignorant and selfish cycling lycra lout.’ Are runners criticised for wearing trainers? Swimmers for wearing swimsuits? Dog walkers for wearing raincoats in the rain? 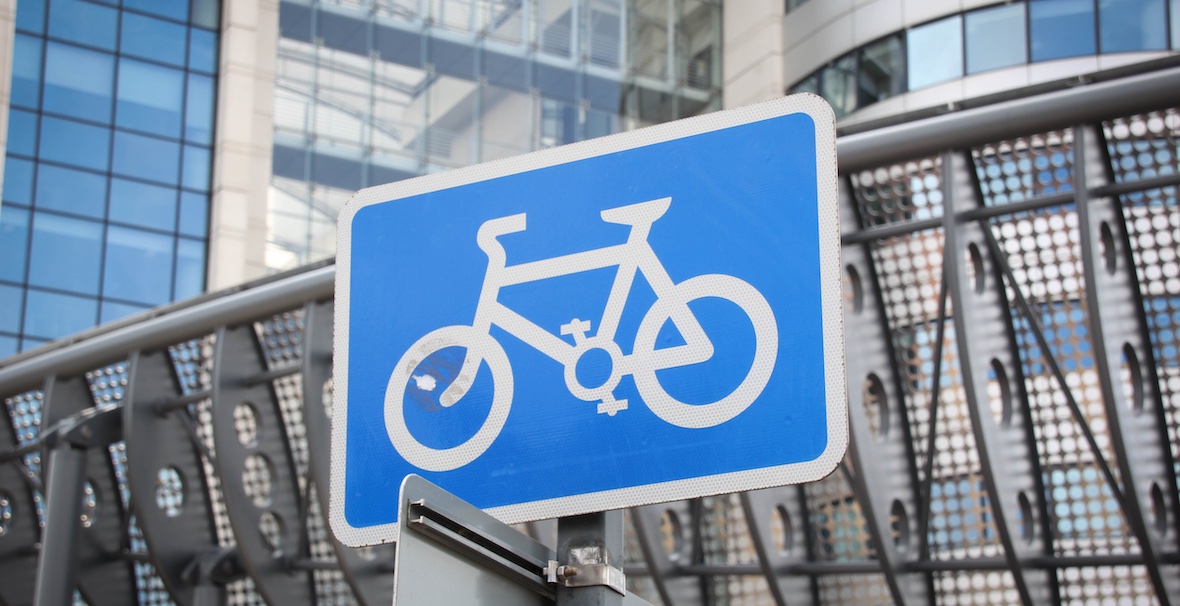 People on bikes are often accused of association with crime. Not only do they regularly run the lights and terrorise pedestrians, but (according to the Conservative councillors’ official submission to a TfL consultation on bike lanes in West London) they ‘increase local crime [by using] cycles for snatch thefts and for planned heists from high-value retailers such as jewellers.’ In south London cycle lanes could enable terrorists to attack London’s water supply, and in West London the local Catholic priest wrote that these ‘state-sponsored, tax-payer-funded plans [for a cycle lane] would do our community more harm … than the Luftwaffe managed with its wartime bombs.’

At the very least they threaten the village atmosphere of urban enclaves; John Major may have mused nostalgically about ‘old maids bicycling to Holy Communion through the morning mist’ but providing cycle lanes for today’s spinsters in London leads inexorably not only to the death of Christianity (according to Catholic priest Richard Dunne), but to the death of the village itself as GLA member Tony Arbour claimed in a much-derided interview where he was drowned out by the sound of passing traffic from large urban SUVs and trucks in a London ‘village.’

Change is difficult. We’ve all been brought up on the concept of cars equalling freedom. Motoring adverts show empty roads winding their way through mountain or desert landscapes with not a traffic light in sight. Who hasn’t been tempted by the idea of simply driving off into the sunset and freedom like Thelma and Louise? Of getting your own greased lightnin’ that’ll not only ‘make the chicks cream’ as John Travolta sang in Grease, but more mundanely free us of the necessity of waiting for buses and trains, or of carrying heavy shopping.

The reality is that as a society we can no longer afford to use our cars thoughtlessly in urban areas for short trips. The hierarchy of the road needs to change; we all need to become more fluid in our transport identities and more tolerant of the other modes. Even as it becomes more prevalent, the othering of cyclists is increasingly outdated.

Maybe it’s time to stop maligning the two-wheeled other and get on our bikes?